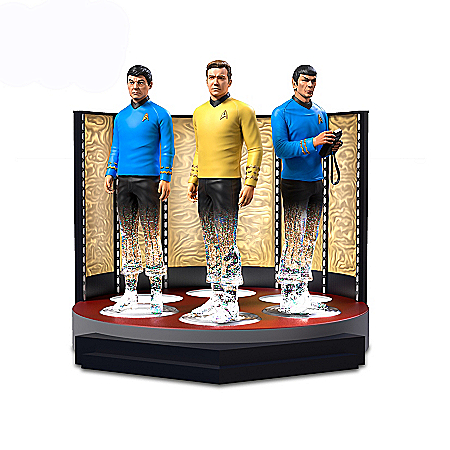 $39.99 STAR TREK To Boldly Go Hand-Painted Transporter Figurine Collection Featuring An Illuminated Transporter Display With Separate Control Panel Console – With its legendary crew and innovative technology, especially the transporter on the U.S.S. Enterprise, the original STAR TREK™ television show became a cultural phenomenon that is popular to this day. Now this iconic sci-fi series inspires a new collection of STAR TREK figurines portraying U.S.S. Enterprise crew members “beaming up” to the Enterprise. You can watch each fully dimensional crew member come to life and rematerialize before your eyes with the To Boldly Go Transporter Figurine Collection, available in a limited edition only from The Bradford Exchange. Your collection begins with Issue One, Captain Kirk. Next to arrive will be Issue Two, Commander Spock, followed by Issue Three, Transporter Display and additional STAR TREK collectible figurines and illuminated transporter console, each a separate issue to follow. Officially licensed by CBS Studios, Inc., each of the crew member figurines in this collection is superbly hand-cast and hand-painted for exceptional likeness and authentic details true to the classic TV show – from their facial expressions to the distinctive insignia on their U.S.S. Enterprise uniforms. Plus, their legs are crafted of clear artist’s resin featuring shimmering glitter within to dramatically capture the “transporter effect.” Each figurine stands on a clear base. The fully sculpted transporter display is the ideal place to showcase your STAR TREK figurines with spots for each crew member to stand. The lights in the platform shine up and into each figurine, reminiscent of the crew being “energized” in the TV show. Plus, the transporter plays sound effects inspired by the show. Complementing the transporter, the light-up console is meticulously handcrafted to recreate the elaborate controls of the original. This collection is a must-have for fans and is expected to excite