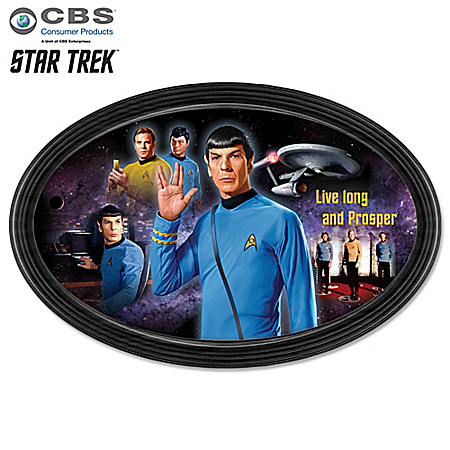 $129.99 Life on earth as we knew it changed forever on September 8, 1966 with the debut of a unique television series created by Gene Roddenberry. Now, this first-ever STAR TREK Commemorative Collector Plate proudly honors STAR TREK™: The Original Series, whose longevity, far-reaching cultural influence and fiercely devoted fan base transformed it into a television phenomenon that boldly went where no man, and no TV series, had ever gone before. A Bradford Exchange exclusive, this important STAR TREK tribute is officially licensed by CBS Studios and is available in a strict limited edition of just 5,000 worldwide!This sophisticated oval-shaped collector plate is specially designed and custom crafted to celebrate the adventurous spirit of Captain James T. Kirk, Mr. Spock, Leonard “Bones” McCoy and the rest of the USS Enterprise crew as they set out on their five-year mission to seek out new life and civilizations. It showcases a dramatic montage featuring Spock in his trademark Vulcan salute and at his science stations, Captain Kirk and Bones, and, of course, the USS Enterprise NCC-1701, all in full, brilliant color. An impressive 16-1/2 inches wide, it boasts a sleek black frame and is sure to enhance your corner of the galaxy with its timeless inscription: “Live Long and Prosper.” This limited-edition STAR TREK tribute is certain to be a focal point in your display of STAR TREK collectibles, and it makes an outstanding gift for a fellow fan, but you must act at warp speed; interstellar demand is expected. Order now!