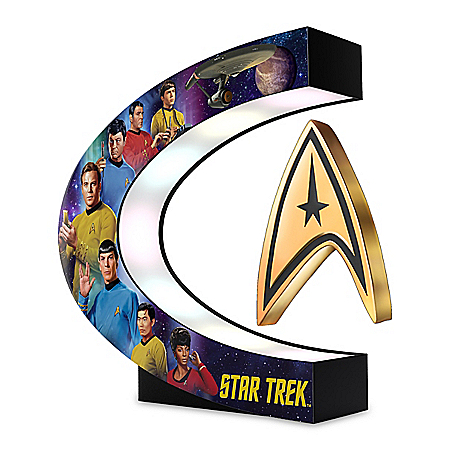 $99.99 With its iconic crew and innovative technology, STAR TREK™ became a cultural phenomenon believed to have influenced real-life science by inspiring futuristic inventions such as the cell phone and wireless technology. Now you can witness the famous STAR TREK Command Insignia float and spin in mid-air with a levitating sculpture available exclusively from The Bradford Exchange.Electro magnets and innovative levitation technology make the metallic golden delta hover within the boldly shaped base of this unique sculpture. The base even lights up and features a vivid montage of the famous starship and ground-breaking characters such as Spock, Captain Kirk and many more! This officially licensed STAR TREK collectible is the perfect addition to your own home and makes a great STAR TREK fan gift, as well. The edition is strictly limited to 10,000 worldwide and strong demand is expected, so don’t wait. Order now!