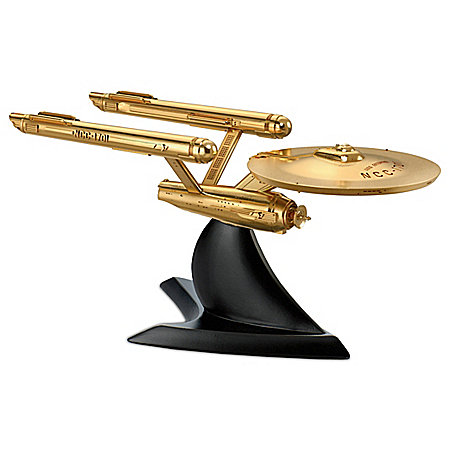 $89.99 STAR TREK Cast Metal Sculpture Collection Featuring Golden Finishes With Sleek Black Bases Shaped Like The Starfleet Command Insignia – The U.S.S. Enterprise NCC-1701 debuted along with STAR TREK™ on September 8, 1966 and quickly became one of the most iconic spaceship designs in all of science fiction and film history. It is now hailed as a “living cultural object” which has influenced real-life space travel. Immediately recognizable for its saucer-shaped command decks and graceful wing-like engine nacelles, it was designed according to aircraft engineering principles. Now you can pay tribute to this legendary starship and others in the iconic series with the STAR TREK Cast Metal Sculpture Collection, available in a limited edition only from The Bradford Exchange. Your collection begins with Issue One, U.S.S. Enterprise NCC-1701. Next to arrive will be Issue Two, and additional STAR TREK collectible sculptures, each a separate issue to follow.? Officially licensed by CBS Studios, Inc., each sculpture in this collection is crafted of cast metal to recreate an iconic STAR TREK spaceship with intricate detailing and gilding to highlight their importance. Each sculpture shines in a bright golden finish that gloriously brings it to life. As the perfect finishing touch, the gleaming sculptures are permanently attached to the base shaped like the Starfleet Command insignia. This collection is a stunning celebration of groundbreaking spaceship design and it makes a wonderful addition to any STAR TREK decor. This limited-edition collection is expected to excite strong demand – so don’t let these ships fly away. Order now!