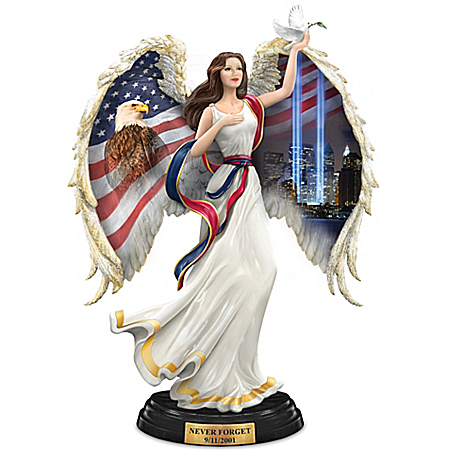 $99.99 America’s Sacred Guardian Angel Figurine Commemorates September 11, 2001 – Our world forever changed on the morning of September 11, 2001. Every year on its anniversary, the Tribute in Light shines into the heavens where the Twin Towers once stood, serving as a beacon of remembrance and hope for a brighter tomorrow. Now, America’s Sacred Guardian Angel Figurine serves as an everyday reminder of America’s enduring spirit, our resilient strength and the founding principles of peace and freedom that unite us all.Available only from The Hamilton Collection, this patriotic angel figurine is entirely hand-sculpted, from the gentle folds of her gown and billowed sash to the dove of peace that rests in her palm. Hand-painted by Master Craftsmen in a rich palette of deep red, bold blue and soft, pearlescent white, this heavenly messenger showcases uplifting scenes on her glitter-kissed wings, including the sweeping New York Skyline aglow with the Tribute in Light and the majestic bald eagle before the proud American flag. As the perfect finishing touch, the base of this limited-edition September 11 tribute bears a commemoratively dated golden marker that reminds us to “Never Forget.” Strong demand is anticipated, so don’t delay. Order now!