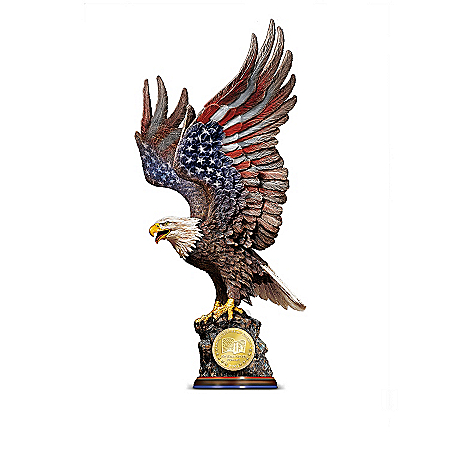 Following the events of September 11, 2001, America stood united, with strengthened resolve and the enduring spirit of freedom on which this nation was founded. Now, display an awe-inspiring tribute to the strength of the American spirit with the 10th Anniversary 9/11 Commemorative Sculpture Collection, exclusively from The Bradford Exchange. Your patriotic eagle sculpture collection begins with Issue One, We Will Never Forget. Soon, your collection continues with Issue Two, United We Stand, Issue Three, Home of the Brave and additional patriotic eagle sculptures, each a separate issue to follow.‡Dramatically evoking the soaring spirit of America and its people, each limited-edition patriotic eagle sculpture in this collection is sculpted in lifelike detail and hand-painted with the bold imagery of the American flag captured in red, white and blue on its outstretched wings. A handsome golden emblem on the mahogany-finish bases boasts raised-relief imagery and inscriptions commemorating 9/11. Most importantly, a portion of the proceeds will be donated to support families of emergency responders who died in service. Strong demand is anticipated, so don’t delay. Order now!