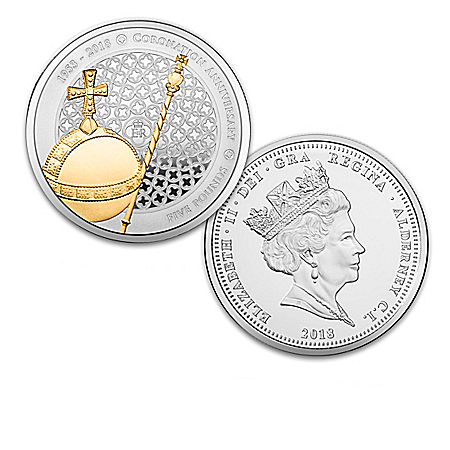 $49.95 The Queen’s Sapphire Coronation Jubilee Silver Plated Proof Coin Collection With 24K Gold Accents – On June 2nd, 1953, a hush fell over the United Kingdom as people settled down in front of television sets to watch their new Sovereign being crowned. For many of the 20 million viewers, it was the first time they’d been able to witness the thousand-year-old coronation ceremony. 65 years later, the Queen continued to establish Royal “firsts” as she became the first-ever British monarch to celebrate a Sapphire Coronation Jubilee. Now, that majestic milestone is elegantly commemorated in The Queen’s Sapphire Coronation Jubilee Coin Collection, exclusively from The Bradford Exchange. Premiering with Issue One, The Queen’s Sapphire Coronation Jubilee, your collection will soon continue with Issue Two, The St. Edward’s Crown and FREE Display Folder. Next to arrive will be Issue Three, The Jewelled Sword of Offering, followed by Issue Four, Long May She Reign, and 4 additional commemorative Proof coins to complete your collection, each a separate issue to follow.‡A must-own Royal Family collectible approved by Buckingham Palace, this collection celebrates Her Majesty’s 65th Coronation Anniversary with eight magnificent coins, all richly plated in 99.9% pure silver and gleaming with 24K gold accents. Each coin in the collection features a striking design of the principal pieces of the Royal Regalia, set against a backdrop inspired by the architecture of Westminster Abbey. Her Majesty graces the obverse, marking it as official legal tender. Each coin is struck in crown size, the traditional size reserved for Royal commemoratives, and with a PROOF finish – the highest quality possible, struck twice for intricate detail and polished mirror-bright surfaces. The official Coronation Anniversary Collectors’ Folder – included with Issue Two – details the rich history of the Coronation Ceremony and is the perfect way to protect and display your coins. Together, this collectio