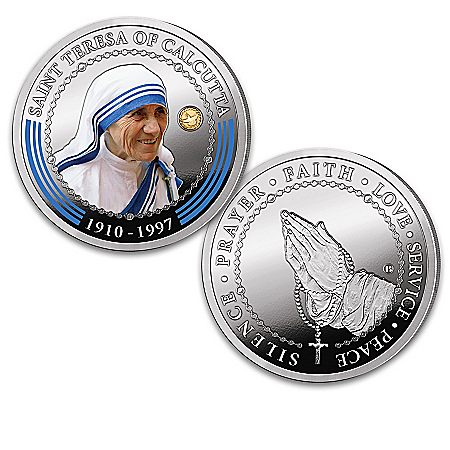 $49.99 Saint Teresa Of Calcutta 99.9% Silver-Plated Proof Coin Collection Featuring Full-Color Images Of The Renowned Humanitarian And 24K-Gold Privy Marks – Bring home this commemorative collection of Proof coins and share a story of faith and love that touched the world! It began on a crowded train in India, far from home, when a young Albanian-born nun experienced a sudden, unquestionable call to action. She felt compelled to leave her convent teaching position to serve the “poorest of the poor.” Wearing a simple, blue-striped sari, she gave her loving care to the sick, the hungry and the hopeless. Her efforts grew into the Missionaries of Charity in Calcutta, India. As her order expanded to 123 countries, Mother Teresa became a shining symbol of compassion worldwide. After her passing in 1997, her life-long dedication was not forgotten. Beatified by Pope John Paul in 2003, she was canonized as Saint Teresa of Calcutta by Pope Francis in 2016. Now, these gleaming treasures mark the 25th anniversary of her passing and honor her legacy. Presenting The Saint Teresa of Calcutta Proof Coin Collection, available exclusively from The Bradford Exchange Mint. This collection begins with Issue One, Saint Teresa of Calcutta. Next to arrive will be Issue Two, Meeting Pope John Paul II and Display Box, followed by Issue Three, Joins Sisters of Loreto, and additional Saint Teresa tribute Proof coins, each a separate issue to follow. Each Proof coin in this collection is richly plated in 99.9% silver with a special design commemorating Saint Teresa and her achievements on both sides. The front of the Proof coin arriving as Issue One portrays Saint Teresa in her familiar sari in full color along with a 24K gold dove privy mark. The back bears a sculpted image of praying hands and words of inspiration. Proof-quality coining dies create their polished, mirror-like fields and raised, frosted imagery. These Proof coins arrive secured in crystal-clear capsules, preserving their bea