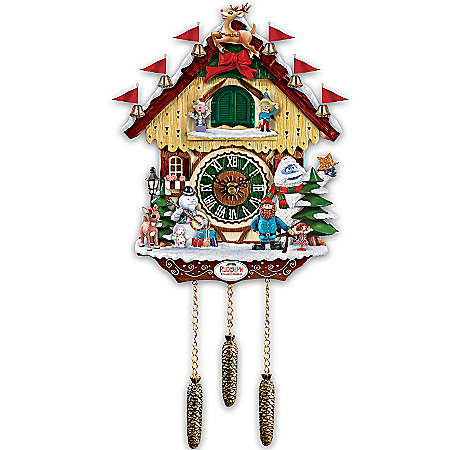 $135 Cuckoo Clock: Rudolph The Red-Nosed Reindeer 50th Anniversary Cuckoo Clock – It seems like just yesterday we first spent a magical hour in front of the TV meeting Rudolph the Red-Nosed Reindeer®, Clarice®, Hermey®, Sam the Snowman® and an enchanted island of misfit friends. Now there’s a cuckoo clock specially designed to take you back in time so you can revisit that wondrous adventure. Introducing the Rudolph the Red-Nosed Reindeer Cuckoo Clock, exclusively from The Bradford Exchange and boasting an original design celebrating the 50th anniversary of the longest-running TV holiday special in history!It just wouldn’t be Christmas without Rudolph and the gang, and with this cuckoo clock you can add a bit of their infectious holiday spirit to every minute of every day! Expertly sculpted and fully functional, with an accurate quartz movement, this cuckoo clock is overflowing with 10 beloved characters and charming details, including Rudolph himself, leaping over the peak of the clock. Best of all, every hour on the hour, Santa emerges from the doors at the top of the clock while the tune of “Rudolph the Red-Nosed Reindeer” fills the air. Intense demand is expected from Rudolph fans everywhere, so don’t delay. Order now!