Precious Moments Just Me And You With An Ocean View Personalized Figurine
Porcelain Fantasy Doll: Fire 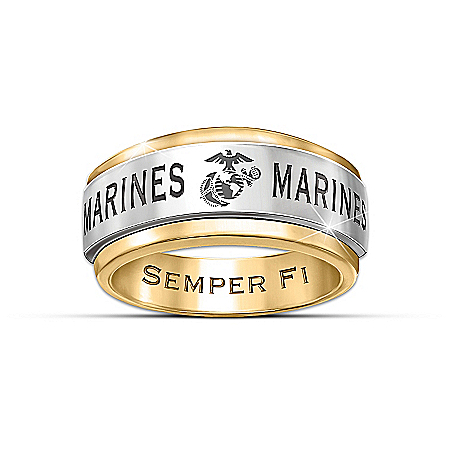 Surround yourself with the heroic pride of the always faithful spirit of the United States Marine Corps with this handsome USMC Semper Fi Ring, a fine jewelry design exclusively from The Bradford Exchange and officially licensed by the United States Marine Corps. Individually handcrafted of Marine-tough solid stainless steel with 24K gold ion-plated accents, this USMC men’s ring features a center band engraved with “Marines” along with the Marine Corps emblem of eagle, globe and anchor. Plus, the center band actually spins when you turn it! As the perfect finishing touch, the inside of the band is engraved with “Semper Fi” (Always Faithful). This distinctive USMC pride men’s ring arrives in a presentation case with a “To Forever Beâ€¦ A United States Marine” card featuring the historic art of the flag raising at Iwo Jima in full color on the front. It makes a meaningful keepsake for yourself or a special gift for the Marine in your life. Strong demand is expected. Order now!

Precious Moments Just Me And You With An Ocean View Personalized Figurine
Porcelain Fantasy Doll: Fire