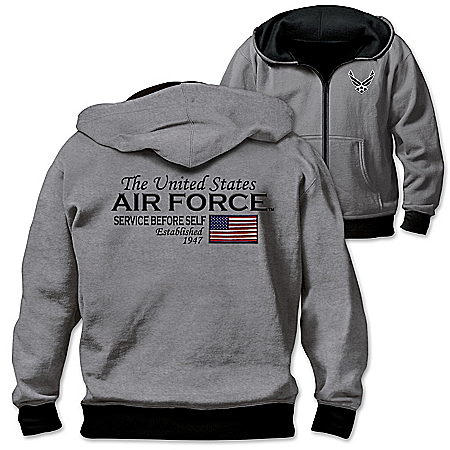 $139.95 The U.S. Air Force has guarded the skies of our nation with bravery and courage no matter the foes they face. Now you can wear a tribute to your Air Force pride with the Reversible Military U.S. Air Force Men’s Hoodie, a custom-designed apparel exclusive from The Bradford Exchange. crafted in an easy-care cotton-blend knit that reverses from black to gray, this officially-licensed U.S. Air Force apparel offers two bold looks in one.This men’s front-zip hoodie features many custom details. A full-front zipper with reversible puller, kangaroo pockets, lined hood, and knit cuffs and hem are repeated on both sides. An embroidered circular branch insignia patch adds a patriotic touch to the left lapel of the black side, which also showcases a banner embroidered with “HOME of the FREE BECAUSE of the BRAVE” on the back. The back of the gray side is printed with the words “The United States AIR FORCE SERVICE BEFORE SELF Established 1947” with an American flag on the side. The front of the gray side features a fully embroidered emblem on the left lapel. Strong demand is expected, so order now!