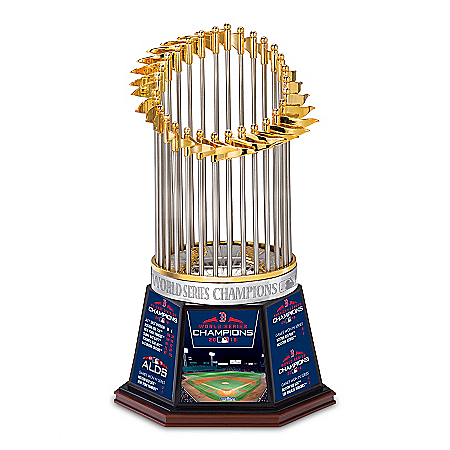 2018 MLB World Series Champions Boston Red Sox Handcrafted Trophy Sculpture – Of all the awards in professional sports, the World Series™ Commissioner’s Trophy™ is certainly one of the most iconic. As a climax to their historic 2018 MLB™ season, the Red Sox™ brought home that coveted trophy and now you can too. This 2018 World Series Champions™ Boston Red Sox™ trophy sculpture captures all the excitement of the team’s epic championship win in a tribute inspired by the actual trophy. Officially licensed by Major League Baseball™ and available from The Bradford Exchange, this is a 2018 World Series Champions Boston Red Sox memorabilia that is sure to be coveted by diehard fans that bleed Red Sox red. This commemorative masterpiece is available in a strict limited edition of only 10,000 worldwide!This expertly handcrafted Boston Red Sox trophy sculpture recreates all the glory and grandeur of baseball’s top accolade with its shimmering silver-plated flagpoles and golden pennant flags. The front of the trophy showcases dramatic imagery from the 2018 matchup against the Los Angeles Dodgers™, flanked by logos and stats from postseason play, including the division and championship games and the 2018 World Series™. It even rests on a handsome wood-finished stand for a museum-quality presentation. Strong demand is anticipated for this 2018 World Series Champions Boston Red Sox collectible and impressive Red Sox fan gift. Hurry to bring yours home – order now! $99.99 USD