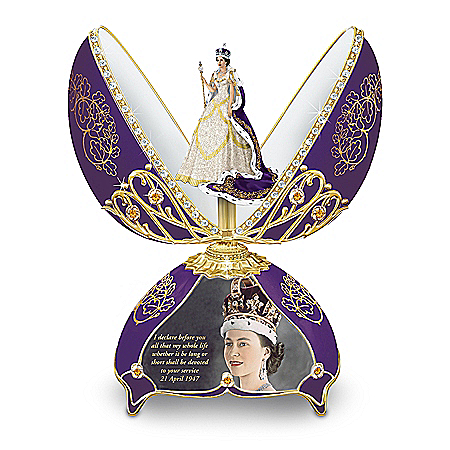 $79.99 Queen Elizabeth II Peter Carl Faberge-Style Egg-Shaped Heirloom Porcelain Music Box Adorned With 22K Gold Accents & Hand-Set With Over 80 Faux Jewels – From the pageantry of her coronation in 1953, to today as the longest reigning monarch in British history, Queen Elizabeth II has lived her life in service to the people of the Commonwealth. Now, celebrate Her Majesty’s glorious reign with the Queen Elizabeth II Music Box, a limited edition available exclusively from The Bradford Exchange. Expertly handcrafted from hand-glazed Heirloom Porcelain? and hand-painted, recreating the opulent style of Peter Carl Faberge, this egg-shaped music box is a magnificent way to honor her life and legacy.Showcased on the outside of this sumptuous royal family collectible is a regal portrait of Her Majesty accompanied by a quote from her 21st birthday in which she dedicated her life to the Commonwealth. Lavished with hand-applied 22K-gold accents, this music box features more than 80 faux jewels, each hand-set in the classic tradition of Peter Carl Faberge designs. Plus, the egg opens to reveal a fully sculpted Queen Elizabeth II figure presented in her royal coronation gown. With the turn of a key, the egg plays the melody of Elgar’s “Pomp and Circumstance.” Strong demand is anticipated, so don’t delay. Order now!