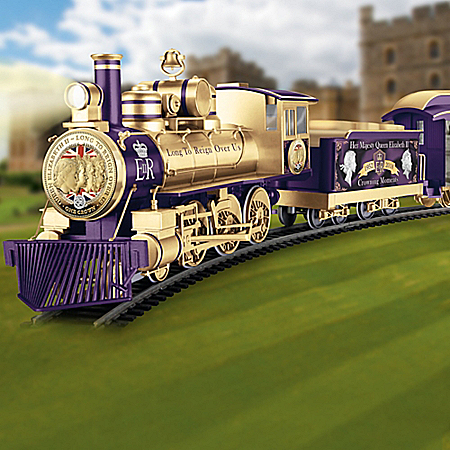 $79.99 Long May She Reign Express Electric Train Collection Featuring Sculpture Of Replica Coins, HO-Gauge 14-Piece Track Set – As Britain’s longest-reigning monarch, Queen Elizabeth II has ruled the Commonwealth for more than 65 years with grace and compassion. Now you can honor this influential and respected monarch with the Long May She Reign Express Train Collection, a first-ever available exclusively from The Bradford Exchange, Hawthorne Village Division. A regal tribute to Queen Elizabeth II, this electric train collection begins with Issue One, Long to Reign Over Us Steam Locomotive. Soon, your collection will continue with Issue Two, Crowning Moments Coal Tender and FREE 14-piece track set, speed controller and power pack, followed by Issue Three, Royal Accession and Coronation Train Car, and additional electric train cars, each a separate issue to follow.This must-have heirloom-quality train runs on any HO-gauge track and celebrates the key milestones of the Queen’s tenure through artwork and sculpture, which adorn all sides of the train cars. Each railway car in the collection shimmers in vivid tones of regal purple and metallic gold and features replicas of the valuable coins that have been issued to commemorate the Queen’s reign. Plated in a brilliant golden tone, the sculpted coins showcase her official effigies throughout the years, as well as her regal cypher. Portraits of the Queen over the decades grace the sides of the train cars as well. Plus, the headlight of the locomotive lights up for a dramatic finishing touch. Strong demand is anticipated for this Royal Family collectible train collection, so order now!