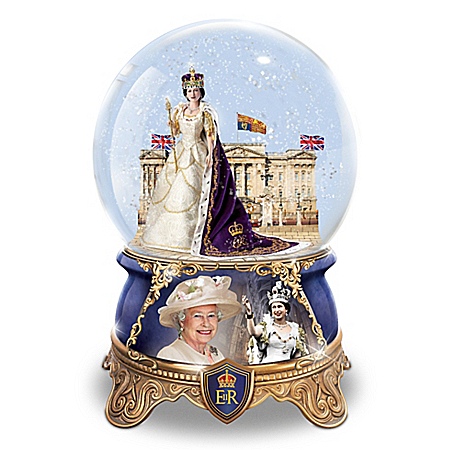 $59.99 Queen Elizabeth II Hand-Painted Coronation Glitter Globe Featuring Full-Color Photographic Images On The Base That Pay Tribute To Britain’s Beloved Monarch – In 1953, the world stood still as Elizabeth Alexandra Mary Windsor ascended Britain’s throne to become Her Majesty Queen Elizabeth II at the tender age of 25. Now, you can celebrate the pomp and pageantry of this significant moment in British history with the Queen Elizabeth II Coronation Glitter Globe, a limited edition exclusively from The Bradford Exchange. Impressive from any angle, this one-of-a-kind royal tribute showcases a masterfully handcrafted and intricately hand-painted fully dimensional sculpture of the new queen and Buckingham Palace on Coronation Day inside a sparkling glass globe.The ornate, royal blue base features present-day images of the queen and at her Coronation in 1953 along with golden embellishments and the crest of her Royal Cypher, ER, denoting Elizabeth Regina (Queen). With a gentle shake, sparkling glitter swirls around the remarkably detailed scene. Your musical glitter globe even plays “God Save the Queen.” This royal tribute is sure to be a conversation piece in your home and it makes a wonderful patriotic gift. Strong demand is expected, so don’t delay. Order now!