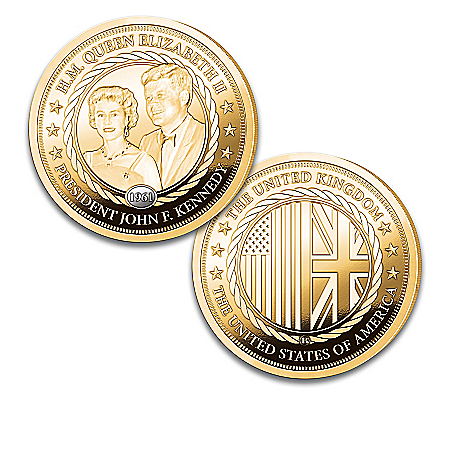 $49.99 Queen Elizabeth II Meeting U.S. Presidents 24K Gold-Plated Coin Collection Featuring Portraits Of The Queen & U.S. Presidents With Rhodium Privy Marks – Over the course of her reign, Queen Elizabeth II has sat the throne through the service of fourteen U.S. Presidents. Of those fourteen Commander in Chiefs, she has personally met thirteen. Those moments were memorable. Now, a collection of commemorative Proof coins documents each of those historic meetings between Her Majesty and the elected leaders of the United Kingdom’s greatest ally. Exclusively from The Bradford Exchange Mint, we are proud to introduce the Queen Elizabeth II Meeting U.S. Presidents Coin Collection, which begins with Issue One, John F. Kennedy. Next to arrive will be Issue Two, Dwight D. Eisenhower and Display, followed by Issue Three, Richard M. Nixon and additional Queen Elizabeth II Proof coins, each a separate issue to follow. Each distinctive coin collectible in this collection is plated in gleaming 24K gold for enduring beauty and minted with Proof-quality coining dies for polished mirror-like fields and raised, frosted imagery. On the front of each Proof is a historical “snapshot” from the occasion Her Majesty met a presiding U.S. President, along with their names and a special rhodium-plated privy mark with the year of the meeting. The backs of the coins proudly display the American and United Kingdom flags in a unified design to emphasize the two nation’s strong alliance. Plus, each commemorative coin arrives sealed for heirloom protection in a crystal-clear capsule which can be displayed and kept safe in the Display Box included with your collection. Strong demand is expected, so don’t miss this opportunity. Order now!