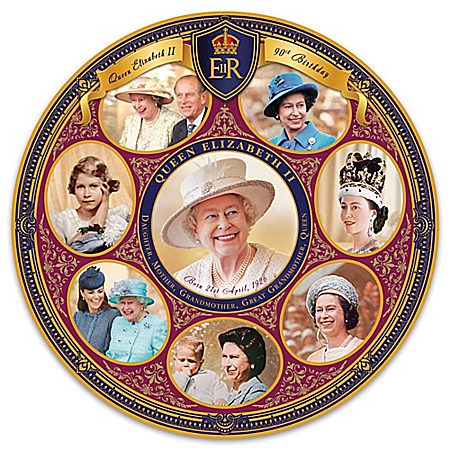 $179.99 Born into royalty, Queen Elizabeth II has conducted herself faithfully and selflessly, more than any other monarch in British history. Now, celebrate her nine decades of service and a lifetime of loyalty and devotion to her people with this Queen Elizabeth II 90th Birthday Collector Plate, a Gallery Edition commemorative, exclusively from The Bradford Exchange. Perfect for anyone who prizes fine Queen memorabilia, this stunning collector plate features eight rarely seen archival photographs in a montage tribute unlike any other. Plus, it is made even more precious in that the edition is limited to 2,016 worldwide!This grandly sized , superbly crafted Heirloom Porcelain® collector plate features genuine 22K gold around the images and on the decorative edge of the royally hued plate. You’re sure to be fascinated by the emotionally charged image of a nine year-old Elizabeth shot mere days after the abdication of her uncle King Edward VIII, her official Coronation portrait from 1953, and a sweet glimpse of Elizabeth the mother holding a tiny Prince Edward. This impressive Royal Family memorabilia also depicts Her Majesty sharing a joyous moment with the future Queen Katherine, and in the central image, a radiant Elizabeth representing the Commonwealth on a state visit to Turkey. Your Queen Elizabeth II 90th Birthday Collector Plate even arrives in a Deluxe Presentation Case with a silken lining. Strong demand is expected, so order now!