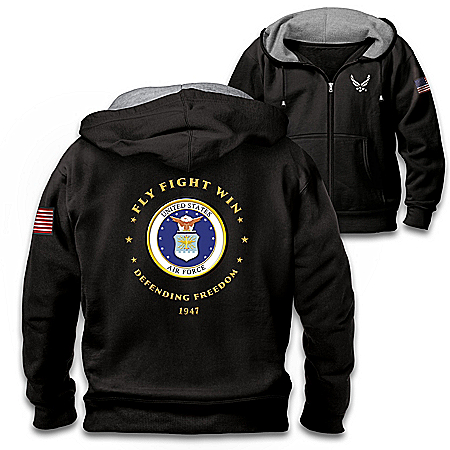 $99.95 The U.S. Air Force™ has produced legendary warriors of the sky since it formed its first ranks. Relentlessly protecting our great nation, they are a force to be reckoned with. Now, you can show off your allegiance to this esteemed military branch with the Proud to Serve U.S. Air Force Men’s Hoodie, a custom design exclusively from The Bradford Exchange. This officially-licensed Air Force apparel is crafted in an easy-care black knit fleece for comfort and style, perfect for everyday wear. This men’s front-zip hoodie features a large appliqu? patch of the official Air Force emblem on the back, framed with the branch motto and slogan, plus the year the Air Force was established, in golden embroidery. An embroidered Air Force insignia is proudly displayed on the front of this military hoodie. An embroidered American flag patch on the left sleeve adds more patriotism while the light gray thermal knit lining in the hood adds style. Custom details include kangaroo pockets, rib knit cuffs, hood drawstrings and a full front zipper. Strong demand is expected for this men’s Air Force hoodie, so don’t wait. Order now!