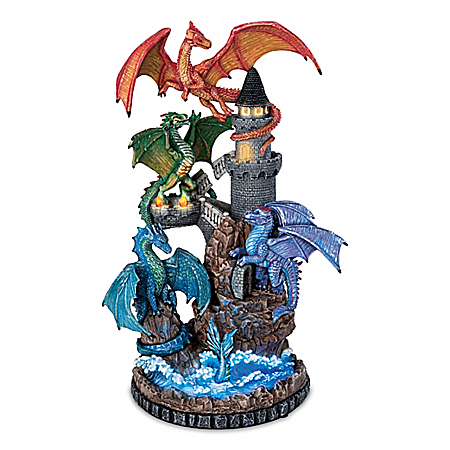 $119.99 Perhaps the most widespread monster in myth and folklore, the dragon is as unique as the culture from which it springs. Civilizations around the world claim unique folkloric tales about dragons. Now, four distinct dragons from all parts of the earth have come to protect a castle with all the might and fury they possess – each symbolizing a quality unique in dragon lore – in the Protectors of the Keep Sculpture. Available exclusively from The Bradford Exchange, this limited-edition masterpiece brings 360 degrees of fascinating mythology into your home.Meticulous handcrafting and hand-finishing in high-shine metallic paints distinguish each unique dragon in this sculpture. The medieval castle they protect is equally detailed, boasting a turret, bridge, hidden passages and much more. In dragon lore, the blue Leviathan at the base represents the vastness of the sea and the unlimited sky. The purple Drake (from the archaic dracó, meaning “dragon”) represents passion, royal power and control, making him a fierce and protective watchman. Symbolizing earth, vegetation and nature, the green Wyvern is likely inspired by the Komodo dragon. The red Dragon at the top symbolizes fire, speed, energy and prowess in battle, particularly in Chinese mythology. Display this dragon sculpture in your own home or give it as a stunning fantasy gift. Strong demand is expected, so act quickly. Order now!