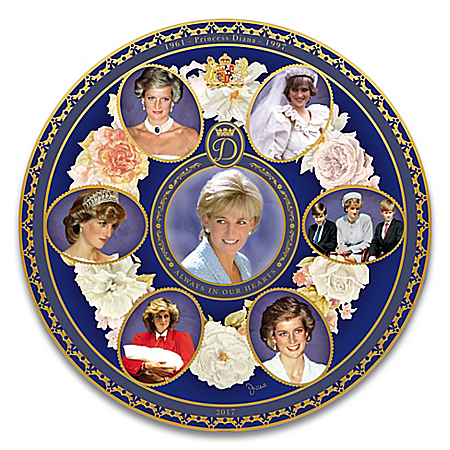 $179.99 Introduced to the world as a shy pre-school assistant, Lady Diana Spencer quickly captured our hearts. Soon, she became a loving mother and the “People’s Princess,” a woman of extraordinary compassion, warmth and kindness. Now, twenty years after her untimely passing, we honor Diana’s life and legacy in this magnificent Masterpiece Commemorative Plate: the Princess Diana 20th Anniversary Collector Plate, available exclusively from The Bradford Exchange in an edition limited to only 2,017 plates worldwide. A masterwork of extraordinary artistic depth and majesty crafted in fine Heirloom Porcelain®, this stunning collector plate recalls Diana’s life in a gallery of seven full-color images capturing her heart and soul.In this magnificent Princess Diana collectible, we remember not her passing, but her smile, the smile that still lights up the world. Enjoy seeing her as a young bride, as a proud mother of two sons and as an ambassador of compassion and caring. In the center, a confident and poised Diana looks toward her future as the People’s Princess. The cameo-style images are embraced by a floral tribute that includes the white rose, one of Diana’s favorite flowers. The Spencer family crest and Diana’s own monogram crown the imagery, while lavish accents of gleaming 22K gold weave throughout. The dedication “Always in Our Hearts” reflects the affection she will always inspire. A deluxe, satin-lined Presentation Case, ideal for protecting, displaying and storing your collector plate, is included. Strong demand is expected for this important limited edition, so don’t wait. Order now!