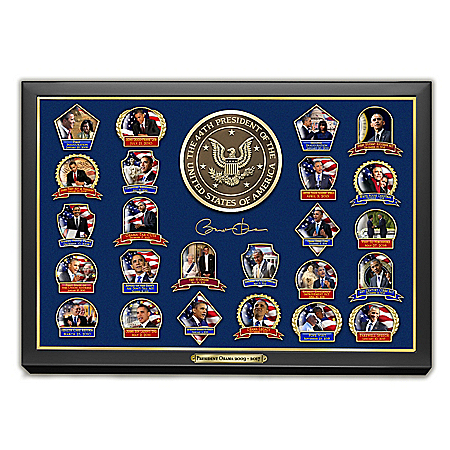 When Barack Obama was elected president in 2008, he hadn’t held public office for very long. Yet his powerful message of hope, engaging persona and what he symbolized resonated with a majority of Americans. And during his eight years in office, he achieved more than most presidents, leaving a legacy of far-reaching accomplishments that will enrich the lives of millions of Americans for years to come. Now you can honor his two terms, eight years and lifetime of commitment with the Presidential Legacy: Barack Obama Pin Collection, available in a limited edition exclusively from The Bradford Exchange. Arriving in sets of two pins each, your collection begins with Issue One, First Inauguration and First Bill Signed. Next to arrive will be Issue Two, another set of two Barack Obama pins. Soon your collection will continue with Issue Three, followed by Issue Four, a custom-crafted wooden display case. Nine additional sets of two Barack Obama pins, each set a separate issue, will follow to complete the collection. Each issue will arrive separately.‡A remarkable tribute to a groundbreaking president, this prestigious collection features 24 metal pins in all, hand-enameled in patriotic colors with rich 24K gold accents. Each diligently researched image captures a different significant event during President Obama’s White House years. Crafted in eight different shapes, your presidential pins arrive in sets of two, each set arriving with a FREE fact-filled Collector Card. The custom-crafted wooden display features a sleek black finish, golden accent border, golden title plaque and easy-open glass cover to protect your pins. Its deep blue felt-lined interior includes a golden sculptural centerpiece inspired by the Presidential Seal along with Barack Obama’s replica signature, and on the back is a pocket to store your Collector Cards. A $100 value, arriving as Issue Four and yours for the same low price as a single set of two pins, this museum-quality display can be hung on a wall or showcased on a tabletop. Strong demand is expected, so don’t delay. Order now!