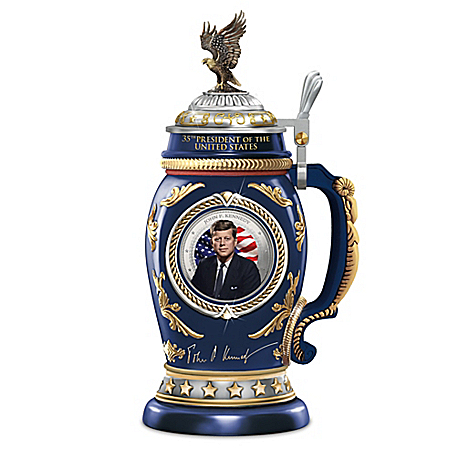 On January 20, 1961, the 35th president of the United States, John F. Kennedy, gave his legendary inaugural address, inspiring Americans to, “Ask not what your country can do for you, ask what you can do for your country.” By calling for more active citizenship, this first president born in the 20th century began a legacy of optimism and accomplishments. Now, celebrate this visionary leader and honor his 100th birthday with a fitting tribute, the President John F. Kennedy Stein, available in a limited edition exclusively from The Bradford Exchange. Handcrafted of triple-fired Heirloom Porcelain® and richly embellished with gleaming 22K gold accents, this President John F. Kennedy stein is hand-underglazed in handsome blue. The front of this striking JFK collectible stein includes a hand-set medallion featuring a full-color portrait of the President backed by the red, white and blue of Old Glory. The president’s name is inscribed on the top of the medallion, richly framed by 22K gold embellishments, while the replica of his famed signature shines in 22K gold script below. Plus, the back of the stein showcases President Kennedy’s meaningful inauguration quote in 22K gold lettering surrounded by 22K gold-accented adornments, including a depiction of the White House. To top it all off, this stunning keepsake features a cast metal lid with golden accents that is crowned by a sculptural eagle topper with hand-painted feathers! Strong demand is expect, so order now! $119.99 USD