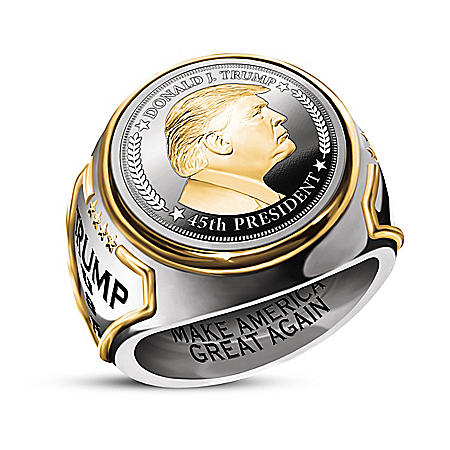 $159 The 45th President Donald Trump 99.9% Silver Coin Ring Adorned With 24K Gold Accents – On January 20, 2017, Donald Trump was sworn in as the 45th President of the United States. Now, you can wear a memory of that moment in history with The President Trump Silver Coin Ring, an original fine jewelry design exclusively from The Bradford Exchange Mint. Expertly handcrafted by artisans to our highest standards, this heirloom-caliber Donald Trump ring makes a unique and bold expression for supporters of the 45th President.Lavished with sterling silver plating, this men’s ring features a 99.9% solid silver coin-style centerpiece in pristine Proof quality. The centerpiece displays a portrait of Trump, fittingly accented with gleaming 24K gold, while the reverse bears a facsimile of Mr. Trump’s signature. Even more 24K gold-plated accents grace the bezel and the sides of the band, calling attention to the ring’s detail. A famous quote by the President is engraved inside the band, while the sides recall his campaign logo design. Strong demand is expected for this distinctive Donald Trump jewelry for men, so hurry. Order now!