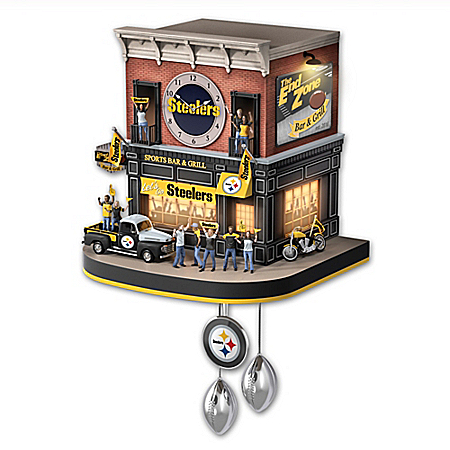 At the stadium, or in the comfort of their own neighborhood bar, Steelers fans are always ready for a celebration. That’s why the Pittsburgh Steelers Fan Celebration Cuckoo Clock is such a delight. This unique Pittsburgh Steelers cuckoo clock showcases an original design inspired by hometown Steelers fans in their favorite hangouts and is available only from The Bradford Exchange. Best of all, this spirited limited-edition wall clock unites lights, sound and motion to create a timely game day atmosphere any true Steelers fan would get excited about.Officially licensed, this Pittsburgh Steelers lighted wall clock is superbly handcrafted in the design of a hometown bar and grill. It features realistic details like pennant flags, an officially authorized team logo clock face, a classic Steelers truck, motorcycle, and avid Steelers fans. But, the real party begins every hour on the hour! The building’s windows and billboard light up and fans “run” out onto the balconies to show their team spirit with a cheer. Plus, a logo pendulum, hanging football weights, and precision quartz movement add to this timely touchdown. Strong demand is expected for this winning Pittsburgh Steelers cuckoo clock, so don’t miss out. Order now!