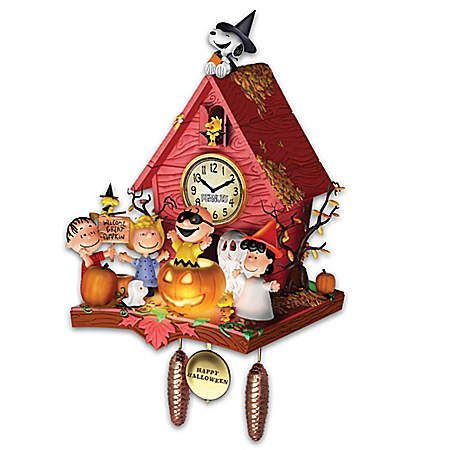 America’s most beloved Halloween special comes to life with the PEANUTS™ characters in a delightful 50th anniversary clock. Now, relive this beloved classic time and again with the PEANUTS Halloween Party Cuckoo Clock, an officially licensed limited edition exclusively from The Bradford Exchange. This PEANUTS Halloween clock is custom crafted, intricately hand-painted and features eight PEANUTS characters, including Snoopy, Charlie Brown, Woodstock, Linus and Lucy – all celebrating Halloween in front of Snoopy’s leaf-covered doghouse while awaiting the Great Pumpkin. And who sits atop this Snoopy cuckoo clock? Snoopy himself, dressed in costume.LED lights illuminate Charlie Brown and the jack-o-lantern front and center. At the top of each hour, Woodstock plays cuckoo and emerges to the PEANUTS theme “Linus and Lucy”. The golden clock face is accented with the PEANUTS logo and is powered by a precision quartz movement to keep perfect time. A golden metal pendulum swings back and forth and is inscribed with “Happy Halloween” as an added festive touch. Measuring almost a foot and a half high, the PEANUTS Halloween Party Cuckoo Clock is a must-have for any PEANUTS fan. Strong demand is expected. So, don’t waste any time – order now!