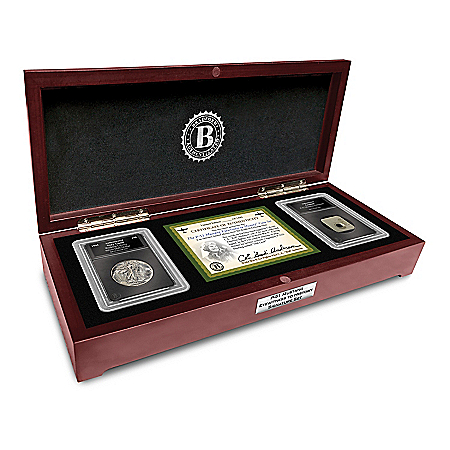 $189.99 The P-51 Mustang Eyewitness To History Genuine 1943 Walking Liberty Legal Tender Coin Set With WWII Artifact & Deluxe Display Case – Into the stormy skies of World War II, America’s Airmen boldly soared, determined to “fly, fight and win.” Yet it took all their valor – and a groundbreaking aircraft, the P-51 Mustang – to bring victory in for a landing. Now, an exclusive presentation from The Bradford Exchange Mint honors these legendary aircrafts and the heroes who flew them with The P-51 Mustang Eyewitness to History Coin Set, available in an edition limited to only 1,945 sets. Your collectible set features a genuine 90% silver, 1943 WWII-era Walking Liberty Half Dollar, a rare WWII artifact, and a Certificate of Authenticity hand-signed by Colonel Anderson himself!Considered one of the most beautiful U.S. coins of all time, your 90% Silver Half Dollar coin portrays a graceful Art Nouveau-inspired Lady Liberty draped in Stars and Stripes, while the reverse bears a majestic American eagle. The rare WWII artifact in your set is real aircraft aluminum recovered from the wing skin of an actual World War II production P-51 aircraft. Your coin and World War II artifact arrive individually sealed for permanent protection within crystal-clear, tamper-proof holders. They are presented as a set, with a serially numbered Certificate of Authenticity, hand-signed by Colonel Clarence “Bud” Anderson, a much-decorated “triple ace” fighter pilot and a World War II “eyewitness” who was honored with the American Fighter Aces Congressional Gold Medal in May 2015. Perfect for your own collection and an impressive patriotic gift for someone special, your set includes a FREE museum-quality wooden Deluxe Display Box. Strong demand is expected, so don’t delay. Order now!