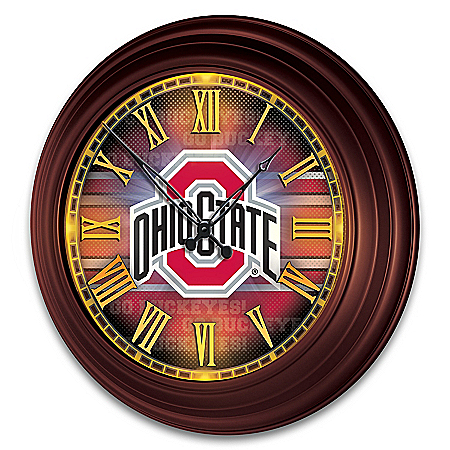 $145 Ohio State University Buckeyes Illuminated Outdoor Atomic Wall Clock Featuring A Glass-Encased Face With Roman Numerals, Team Colors & Logos – Ohio State Buckeyes® fans know that precision, accuracy and timekeeping mean everything when their team hits the field. These are the same qualities that define the atomic clock, an undisputed champion of timekeeping. Now Buckeyes® loyals can score the same unfailing self-setting accuracy with the Ohio State® Wall Clock, a first-ever limited-edition timepiece available only from The Bradford Exchange. Officially licensed by The Ohio State University Buckeyes, this distinctive indoor/outdoor clock is the ultimate statement of pride, showcasing the iconic Ohio State emblem front and center, against a vivid field with the look of jersey texturing and a Go Buckeyes!® message.Over a foot in diameter, this impressive Buckeyes clock is in sync via radio waves with the official source of U.S. time in Fort Collins, Colorado, making it completely self-setting to within a second. You won’t even have to change the time for Daylight Saving because the clock adjusts itself! And when the built-in sensor detects darkness, it cues hidden LED lights to automatically illuminate the glass-encased face and golden Roman numerals. Plus, the clock’s stylish housing is expertly crafted of copper-toned metal for weather resistance Buckeyes fans can appreciate. Strong demand is expected for this unique atomic clock and it makes a winning Ohio State gift as well. Don’t miss this opportunity. Order now!