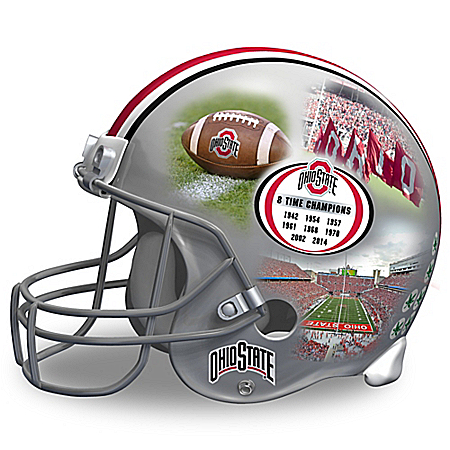 $149.95 Celebrating more than 125 seasons, and commemorating the 100th anniversary of the Ohio State Buckeyes® first Big Ten title in 1916, the Buckeyes® football team is one of the finest college teams in the nation! Now you can honor the storied history of Ohio State® with a limited-edition, officially licensed, full-sized football helmet sculpture. This Ohio State Buckeyes Collage Helmet Sculpture is an exclusive first-ever tribute available only from The Hamilton Collection and captures all the excitement and glory of the coveted Buckeye® tradition, which claims 37 Conference Championships, four Division Championships, and eight National Championships!Expertly crafted in cast resin and sporting an authentic-looking real metal facemask, this Ohio State Buckeyes sculpture is modeled after an official, full-sized helmet and is sure to kindle your winning spirit! It boasts dynamic campus photos like the beloved Ohio stadium, and an action-packed photo of Brutus Buckeye, the Ohio State mascot, cheering on the crowd – all captured in a dynamic collage-style layout! Official logos celebrate each of the Buckeyes® eight National Championship seasons, and six Buckeye Leaves honor a school tradition of sports excellence. This exciting Ohio State collectible is a must for fans and makes a great gift for the sports enthusiast, but strong demand is expected so don’t delay. Order now!