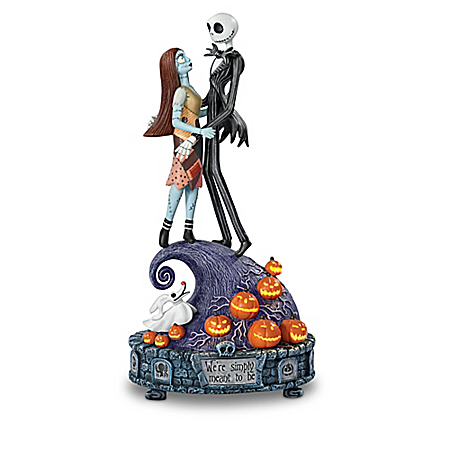 $69.99 The Nightmare Before Christmas Jack And Sally Musical Figurine Collection – Standing side by side atop the swoosh and swirl of Spiral Hill, a surge of emotion at last overtaking them, Jack and Sally gaze into each other’s eyes and finally acknowledge what we’ve known all along: they’re meant to be! Now you can relive every magical moment of this quirky and unconventional love story with The Nightmare Before Christmas Figurine Collection, a specially designed, officially-licensed illuminated musical figurine collection from The Bradford Exchange. Your journey in this Halloween Town love story begins with Issue One, Simply Meant to Be. Soon your collection will continue with Issue Two, and additional Jack and Sally musical figurines, each a separate issue to follow.Witness a love story that has touched many hearts with this Jack and Sally figurine collection. Each fully sculpted and hand-painted figurine captures every magical moment of Jack and Sally’s unique love story in “Tim Burton’s The Nightmare Before Christmas.” To add to the hauntingly beautiful atmosphere, hidden LED lights add a ghostly glow to Zero and a patch full of pumpkins in Issue One and future issues. Issue One also includes a tombstone plaque with the inscription, “We’re Simply Meant to Be.” These musical figurines play portions of the film’s music, including the movie’s beloved closing song, played in Issue One. Available in a limited edition of 295 crafting days and strong demand is expected, so don’t wait! Order now!This fine home decor is not intended for children.