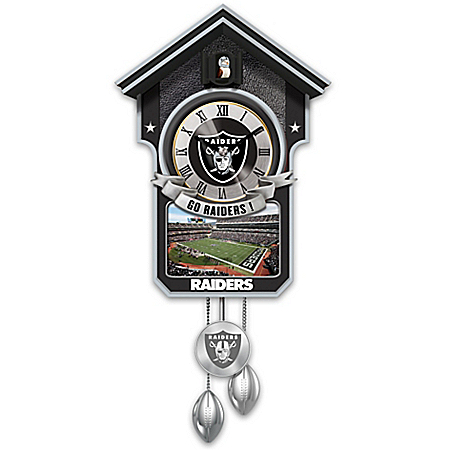 Members of the Raiders Nation, now is the time to bring home this bold Oakland Raiders Cuckoo Clock and cheer on the team every moment of every game day. A Bradford Exchange exclusive, this distinctive Oakland Raiders Wall Clock is officially licensed by NFL Properties LLC and is sure to make a winning impression in your home. In fact, a traditional cuckoo bird wearing a Raiders helmet emerges from the doors at the top of the clock every hour, ready to chirp, er, cheer, on the team. But it’s only available in a limited edition of just 10,000 worldwide, making this wall clock a touchdown addition to any collection of Raiders memorabilia!Every detail of this bold Oakland Raiders Cuckoo Clock is specially designed to capture the excitement of NFL football. A collectible like no other, it boasts a precise quartz movement and handcrafted clock case finished in the team’s black and silver colors, along with gleaming football-shaped weights and a swinging pendulum bearing the official Raiders logo. The clock face features the team logo as well, while beneath it a full-color image of the field on game day commands attention, highlighted by the team name and a banner sporting the words “GO RAIDERS!” For yourself or as the ultimate Oakland Raiders fan gift, this limited-edition cuckoo clock is a must-have, but strong demand is expected. Don’t wait, order now!