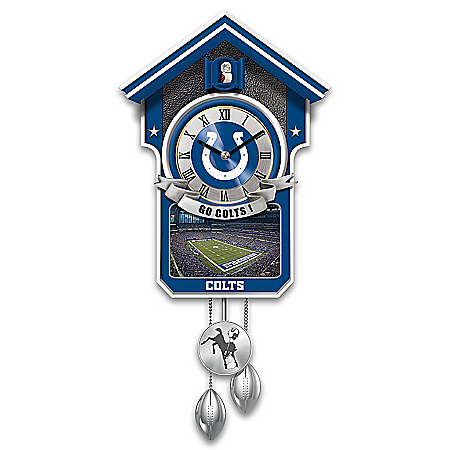 $199.95 Anytime is a great time to watch your Indianapolis Colts in action! Now, there’s a truly unique way to show off your love of Colts football with the Indianapolis Colts Cuckoo Clock, available in a strict limited edition only from The Bradford Exchange. Officially licensed by NFL Properties LLC, this striking football collectible wall clock is individually handcrafted and hand-painted for rich detail and quality in the traditional Colts blue and white colors. The classic Colts horseshoe logo appears on the face of the clock and the swinging pendulum displays the iconic bucking horse. A vivid, full-color image of the Colts playing field is shown front and center, adding game-day excitement, while a banner below proclaims “GO COLTS!”.You’ll never be late for kickoff because this Indianapolis Colts Cuckoo Clock boasts a precise quartz movement for accuracy and durability that powers the decorative football-shaped weights and swinging pendulum with the official Colts logo. Best of all, a traditional cuckoo bird – wearing a Colts helmet – pops out of the miniature doors at the top of every hour as that familiar chirping sound fills the air! Not only a terrific way to let everyone know that Colts time is any time, this NFL football collectible clock makes a great Indianapolis Colts fan gift. Strong demand is expected. But, don’t waste another minute, because the edition is limited to just 10,000 worldwide. Avoid disappointment and order now!