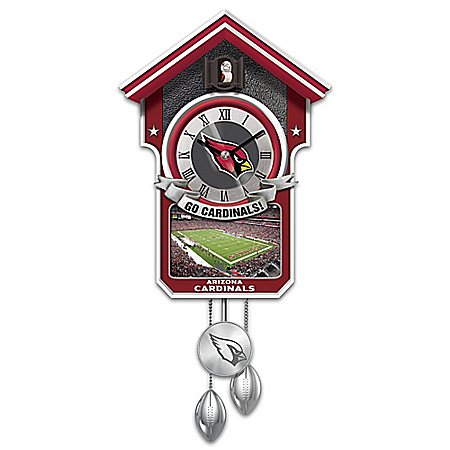 $199.95 NFL-Licensed Arizona Cardinals Wall Cuckoo Clock Featuring Bird With Football Helmet – If you are an Arizona Cardinals fan, its always time to celebrate! From their powerful offense to their intimidating defense, they dominate the gridiron every single second they’re on the field. Now, these legends of the NFL are honored with the Arizona Cardinals Cuckoo Clock, only from The Bradford Exchange. Officially licensed by NFL Properties LLC, this unique Arizona Cardinals wall-hanging cuckoo clock features a traditional cuckoo bird wearing a Cardinals helmet that fills the air with spirited chirping every hour on the hour. Now that’s the sign of a true Cardinals fan!Boasting a finely handcrafted body and gleaming hand-painted team colors, the Arizona Cardinals Cuckoo Clock showcases vivid, full-color game day imagery across the bottom, topped with a silvery “GO CARDINALS!” banner. A precise quartz movement powers the decorative football-shaped weights and a swinging pendulum with the Cardinals iconic logo. If you love to cheer for your Cardinals around the clock, don’t miss this opportunity. This NFL cuckoo clock is only available in a strict limited edition of only 10,000 worldwide and strong demand is expected. Makes a great NFL fan gift too, so hurry. Order now!