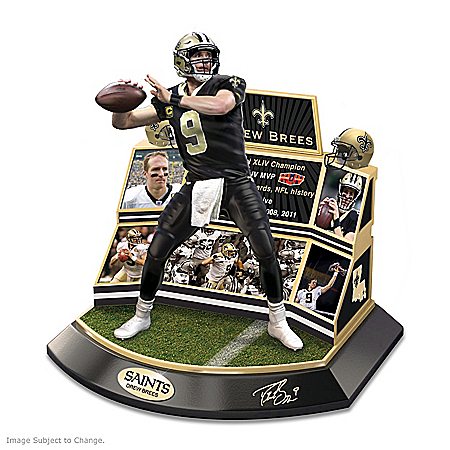 $129.99 NFL Legends Of The Game: Hand-Painted New Orleans Saints Drew Brees Sculpture – An elite quarterback and team leader who led the New Orleans Saints to their first Super Bowl Championship at the end of the 2009 season, 12-time Pro Bowl Selection Drew Brees is that special kind of record-breaking firebrand. Shattering records year after year, his name has become synonymous with greatness. Now, you can honor his amazing career with the NFL Legends of the Game: Drew Brees Sculpture, exclusively from The Bradford Exchange, Hawthorne Village Division. Officially licensed by NFL Properties LLC and NFL PLAYERS, this heirloom-quality sculpture is handcrafted and hand-painted with intricate details and lifelike realism that captures the passion and intensity of #9, one of the greatest quarterbacks to ever play the game!The amazingly lifelike figure of Drew Brees at the center of this sculpture captures him as he prepares to rocket another record-breaking completion pass. Standing in front of a sculpted stadium backdrop that includes high-resolution photos of him in action, plus highlights of his career achievements, this commemorative sculpture is an instant collector’s item. Other features that are sure to thrill his fans include the team logo, helmets and colors throughout and a playing field with the texture of stadium turf. This whole scene is elegantly mounted on a handsome glossy black base with an etched gold-tone title plaque featuring Drew Brees’s replica signature. Strong demand is expected for this NFL collectible, and it is only available in a limited edition of 2,009 worldwide, so don’t miss out – order now!