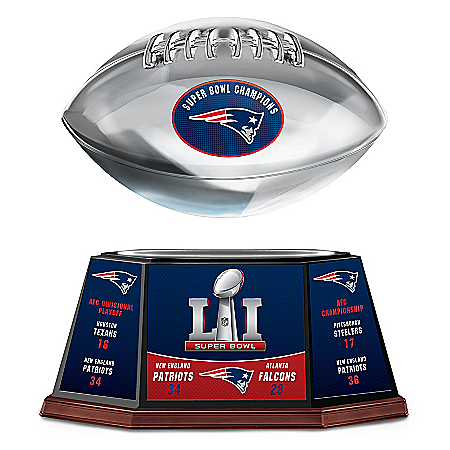 The Patriots epic Super Bowl LI victory was one for the NFL record books. But if you’re a devoted fan, you can relive that history-making moment for always with the New England Patriots Super Bowl LI Championship Football Sculpture, a first-of-its-kind tribute exclusively from The Bradford Exchange. Officially licensed by NFL Properties LLC, this must-have NFL collectible is a true touchdown in uniqueness because it showcases a Super Bowl LI Champions football that actually hovers and spins in mid-air through the innovative use of hidden electromagnets, to capture all the thrill and excitement of that historic game.This distinctive levitating football sculpture is superbly crafted and features a handsome wood-trimmed base showcasing the New England Patriots iconic colors, logos and stats from their winning season. Plus, with just the flip of a switch, white lights shine up and on the silvery levitating football to create an even more dramatic effect. Intense demand is expected for this commemorative Patriots tribute sculpture, and it has a limited edition of only 10,000, so don’t wait to honor your Super Bowl LI Champions. Order now!