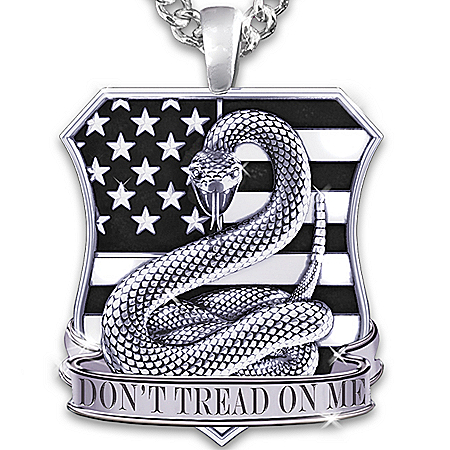 $89.99 Citizens of this great nation are more than justified in their American pride for a country that so vigorously fought for its independence, and to this day still fiercely defends its treasured way of life. Now, you can honor the legacy of this proud land and the freedoms won when you wear the Don’t Tread On Me Men’s Pendant Necklace, an American pride custom jewelry design exclusively from The Bradford Exchange. Crafted in gleaming, tough-as-an-American solid stainless steel, our shield-shaped men’s pendant features a striking sculptural image inspired by the famous rattlesnake on the Gadsden Flag, which was created during the Revolutionary War by American General and statesman Christopher Gadsden.The threatening stare on the rattlesnake, along with the words “DON’T TREAD ON ME”, stand out in raised relief against an image of Old Glory. A combination of the shield shape, a symbol of protection, and the bold and burnished symbols of our fiercely won independence make this men’s necklace a magnificent statement piece of patriotic pride. Adding to the meaning and value, the pendant is finely engraved on the reverse side with “GOD BLESS AMERICA”. A matching 24″ stainless steel open linked chain completes the look. Strong demand is expected. So don’t delay. Show you’re an American patriot with pride and order the Don’t Tread On Me Pendant Necklace now!