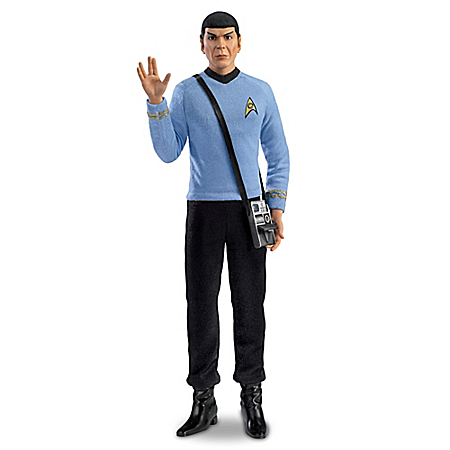 $99.99 For 50 years, the U.S.S. Enterprise’s™ first officer has captivated audiences with his wit, logic and memorable dialogue. Now, hear Mr. Spock deliver his iconic phrases with a talking figure that brings actor Leonard Nimoy’s epic character to life whenever your wish. Introducing the Mr. Spock Figure, a dramatic commemorative tribute exclusively from The Ashton-Drake Galleries.Officially licensed by CBS Studios Inc., this fifteen-inch STAR TREK™ figure is crafted of artist’s resin and hand-painted to create a remarkably lifelike likeness of Mr. Spock. Poseable and Starfleet approved, from his fabric uniform to his replica tricorder, Mr. Spock is sure to delight STAR TREK fans everywhere. Plus, at the touch of a button, your Mr. Spock Figure will greet you with “Live long and prosper” as he gives his Vulcan salute. You’ll also hear “Illogical,” and “Fascinating” as only Leonard Nimoy could say them. Strong demand is expected, so order now!