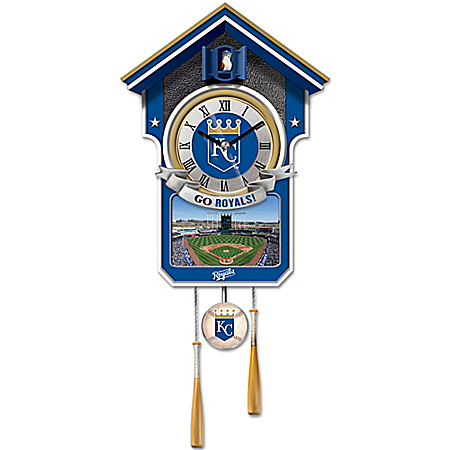 $199.95 MLB-Licensed Kansas City Royals Cuckoo Clock Featuring Bird With Baseball Cap – For the beloved Kansas City Royals™, there have been many moments of greatness. Now fans can celebrate every single one of those moments with the Kansas City Royals Cuckoo Clock, a limited-edition tribute from The Bradford Exchange. Officially licensed by Major League Baseball Properties, this handsome wall clock is a home run for the Royals fans with a strict limited edition of only 10,000 worldwide. Best of all, an adorable cuckoo bird sporting a Royals baseball cap pops out of swinging doors every hour on the hour to chirp his support, along with the cheering crowd.Individually handcrafted and hand-painted in team colors, your Kansas City Royals cuckoo clock showcases a full-color scene of Kauffman Stadium™ across the front. The instantly recognizable team logo is emblazoned on the clock face beneath a durable glass cover, and above a silver-toned banner that reads “GO ROYALS!” Featuring sculptural baseball bat-shaped hanging weights and a swinging baseball pendulum with the official Royals logo, this winning timepiece will look fantastic anywhere in your home. Makes a great Kansas City Royals fan gift too, but demand is sure to be strong. Hurry and order now!