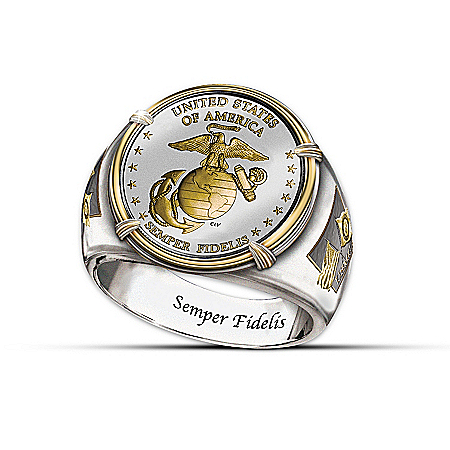 Since 1775, the United States Marine Corps has guarded our freedom, so it was only fitting for the USMC to be the first armed service honored with a United States Commemorative Coin. Now, the scarce 2005 Marine Corps 230th Anniversary Silver Dollar inspires the USMC Commemorative Proof Ring, a fine jewelry exclusive from The Bradford Exchange Mint. Faithfully recapturing the design of the coveted Marine Corps 230th Anniversary Silver Dollar in stunning proof quality, this unique USMC men’s ring is a shining salute to our nation’s heroes.Superbly handcrafted and gleaming with 24K gold-plating, this Marines men’s ring is a bold expression of Semper Fi spirit with side shanks showcasing hand-enameled imagery of the American and USMC flags. Plus, the inside of the band is engraved with the Marine Motto: “Semper Fidelis,” as the finishing touch. Strong demand is anticipated, so don’t delay. Order now! $129.00 USD