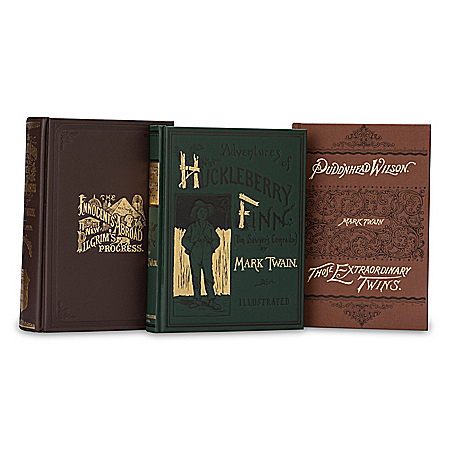 $119.99 The Mark Twain First Edition Library 3-Volume Reproduction Book Set Featuring Original Illustrations Just As They Appeared When First Published – Create a literary legacy for your family with a three-volume set of exact reproductions of first edition Mark Twain books, from what is widely regarded as the first great American novel, ?Adventures of Huckleberry Finn,” to the famed travelogue “Innocents Abroad” that established Twain as a sought-after lecturer and Twain’s takedown of slavery with the novel “Puddin’head Wilson.” Now, you can own these masterpieces as Twain originally envisioned them with The Mark Twain First Edition Library 3-Volume Book Set, featuring reproductions reissued for the first time in their original form by expert literary preservationists and exclusive publishers, The Bradford Exchange Press.A testament to their masterful recreation, the publishers presented these exact reproduction books to acclaimed Mark Twain scholars in Elmira, NY and received accolades and a review in the “Mark Twain Journal.” The books have the same debossed and gilded covers, 19th-century illustrations, bindings and even the typographical errors of the first editions. The original typeface and illustrations by famed illustrators like True Williams and E. W. Kemble are meticulously reproduced, recreating each book just as Twain intended. FREE protective dust jackets are included with each replica book in this historic set. Plus, each book in your set arrives with a FREE Twain “Inside Stories” insert for added value. Strong demand is expected, and fewer than 75 sets remain available, so don’t wait. Order now!