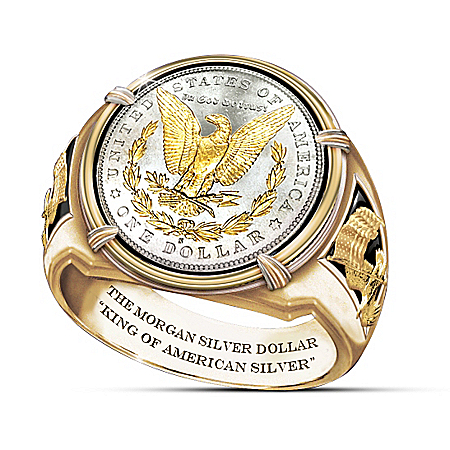 A vast fortune in silver pouring out of the Comstock lode led to the Morgan Silver Dollar. And it was the Morgan’s 90% pure silver, long vanished from U.S. circulating coins that made collectors view it as the “King of American Coins.” Now the King of American Silver Ring, a fine jewelry exclusive from The Bradford Exchange Mint, brings the Morgan’s rich silver legacy and historic design to a uniquely wearable treasure. Showcasing a 99.9% pure silver centerpiece and gleaming with 24K gold-plated accents, it’s a reflection of American history any man would be proud to wear.Expertly crafted of 99.9% silver, the 1878 Morgan Silver Dollar inspired centerpiece of this ring magnificently recaptures George T. Morgan’s eagle reverse design. Both the centerpiece and its setting are highlighted with 24K gold. On the sides of the ring, a raised-relief eagle and flag design is enhanced with black enameling and 24K-gold plating. The inner band is engraved with: The Morgan Silver Dollar “King of American Silver”, for the striking final touch. Your eagle coin inspired ring arrives in a deluxe presentation case, but hurry – strong demand is expected, so order now! $179.00 USD