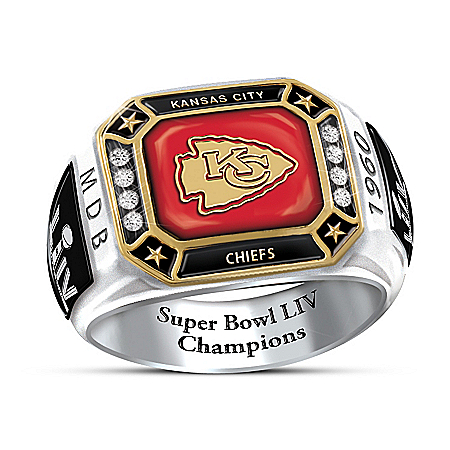 $199.99 Personalized Jewelry – Super Bowl LIV was a fine moment in NFL history, chronicling a memorable performance by the Kansas City Chiefs. Now you can always recall that historic victory with the Kansas City Chiefs Super Bowl LIV Personalized Fan Ring, an original fine jewelry design available only from The Bradford Exchange. Officially licensed by NFL Properties LLC, this Super Bowl LIV Champions commemorative men’s ring is a bold way to show your NFL loyalty. Best of all, it can be engraved for free, with up to three initials, for one-of-a-kind Super Bowl LIV Champions memorabilia you can take anywhere!Individually handcrafted of solid sterling silver, this commemorative ring features the team logo front and center, standing out against rich team-color enameling. Around the logo, the team name and golden stars rise above a field of black, while eight genuine crystals flank the sides to create a dramatic effect. The Super Bowl LIV Champions logo is emblazoned on either side of the ring, with the year the franchise was established engraved above on one side and your engraved initials on the other side. Plus, the band is engraved inside with “Super Bowl LIV Champions” for must-have NFL jewelry. It makes a great gift for devotees of Kansas City football too! Intense demand is anticipated and it is offered in a strict limited edition of only 5,000, so don’t wait to honor your Super Bowl LIV Champions. Order now!