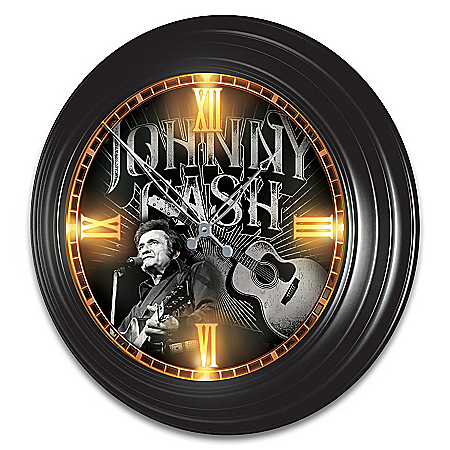 $145 Johnny Cash Outdoor Illuminated Atomic Wall Clock Featuring A Glass-Encased Face With Iconic Johnny Cash Imagery & Roman Numerals As Hour Markers – Fueled by his compassion for folks down on their luck, Johnny Cash strode into a California prison on January 13, 1968 wielding only a guitar. He brought the house down in an unforgettable performance destined to resonate forever in American music history. Now, his timeless performance and legacy is remembered as never before with this Johnny Cash Wall Clock, a limited edition available exclusively from The Bradford Exchange. Accompanied by up-to-the-second tech-driven precision, this atomic clock honoring The Man in Black is completely self-setting. With its bold design and official imagery, this clock makes a unique and impressive addition to any Johnny Cash decor.Over a foot in diameter, this rugged clock stars Johnny Cash performing at the 1968 Folsom Prison concert. The clock face is also embellished with stylized graphics and a good look at Johnny Cash’s trusty Martin acoustic guitar. Because the clock is in sync via radio waves with the official source of U.S. time in Fort Collins, Colorado, you never need to adjust or correct the time, even when you gain or lose an hour with Daylight Saving. And thats not all, because as night falls, it lights up! A built-in sensor detects darkness and cues hidden LED lights to automatically illuminate the glass-encased face and Roman numerals with a golden light. Too extraordinary to stay indoors, the clocks housing is crafted of black metal for weather resistance and handsome styling. Strong demand is expected, so don’t delay. Order now!