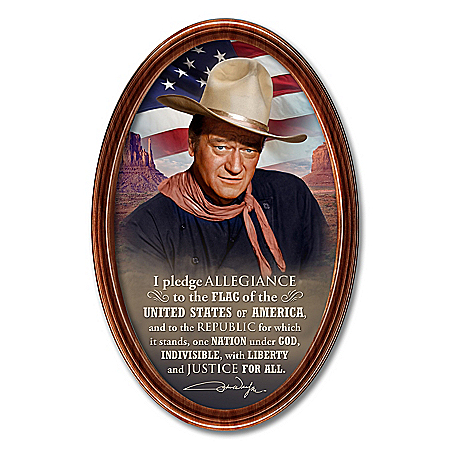 $139.99 John Wayne: The Pledge Of Allegiance Patriotic Oval-Shaped Collector Plate Featuring An Officially Licensed Portrait Of The Duke With Replica Signature Within A Woodgrained Frame – John Wayne was always a stand-up guy, and not bashful when it came to his patriotism and unwavering support for the traditional values of our nation. Now, you can capture Duke’s heartfelt patriotism with the John Wayne: The Pledge of Allegiance Collector Plate, a Masterpiece Framed Edition exclusively from The Bradford Exchange. This extraordinary tribute to John Wayne recalls his love for actor-singer John Mitchum’s musical piece, “America, Why I Love Her.” Duke was so inspired by it that he recorded a 1973 album and book by the same name. Mitchums musical composition and a short film narrated by John Wayne, which included “The Pledge of Allegiance,” were aired on countless American TV stations at nightly sign-off time. John Wayne and The Pledge of Allegiance will forever be entwined and now they can be a special part of your patriotic home.Featuring an officially licensed John Wayne portrait paired with his beloved “Pledge of Allegiance” against a backdrop of the Stars and Stripes and Monument Valley, Utah, this impressively sized oval presentation cements his image as America’s favorite, and most upstanding, cowboy. Duke’s replica signature adds the perfect finishing touch to this masterful John Wayne collectible tribute. It even arrives ready to hang in a sleek, handcrafted, woodgrained frame that perfectly complements the imagery. Strong demand is expected for this masterpiece John Wayne decor and the edition is strictly limited to only 5,000 worldwide, so don’t wait. Order now!

John Wayne: The Pledge Of Allegi