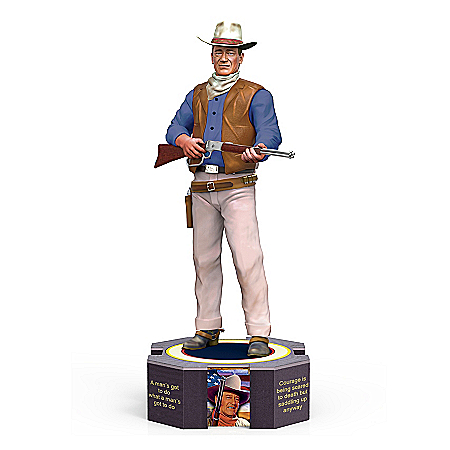 $99.99 One of the most beloved actors of all time, John Wayne’s movie career spanned over 50 years, during which he starred in over 175 films and secured his place in cinematic history – and America’s heart – as the ultimate “good guy.” Now you can display a bold tribute to this silver screen legend with a limited-edition John Wayne figurine, available exclusively from The Hamilton Collection.Standing at 11 inches tall, this hand-painted figurine captures Duke’s rugged handsomeness in stunning detail, from the brim of his cowboy hat to the spurs on his boots. Master artisans use a blend of metallic and glossy hues to hand-paint your figurine one brushstroke at a time. Adding even more authentic appeal to this must-have John Wayne collectible, the 4-sided granite-look pedestal base features images of Duke from some of his most iconic roles, as well as quotes from both his film career and personal life. Widespread demand is anticipated for this officially licensed John Wayne Limited Edition Figurine, so don’t delay. Order now!