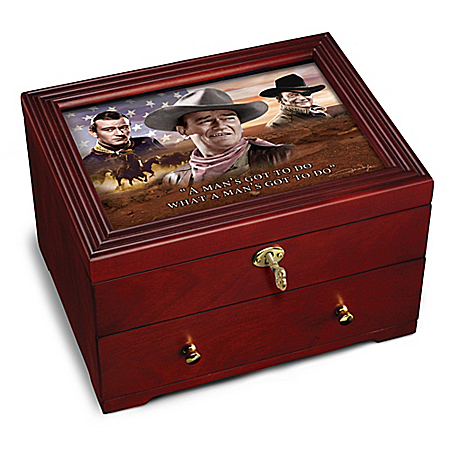 Actor, producer, director and American legend, John Wayne sat tall in the saddle and left some big boots to fill. Now, you can honor Duke in a fitting tribute with the John Wayne: Legend Keepsake Box, a Collectibles Market First only from The Bradford Exchange. Decades ago, most men wouldn’t be without a strongbox, a sturdily-made, lockable box or chest for safeguard valuable possessions. This handsome wooden strongbox recalls the rich history of this cherished men’s keepsake with an exciting showcase of John Wayne’s memorable movie career.Officially licensed by John Wayne Enterprises, this custom-crafted strongbox is stained in warm cherry, with gleaming brass-finished hardware and a working lock and key. Beneath a pane of sparkling clear glass on the hinged lid, classic movie art from 3 of John Wayne’s most memorable performances are recreated in a subtle Western movie-inspired color palette against a backdrop of Old Glory. There is even a classic movie quote and Duke’s replica signature! Outfitted with an upper storage compartment and a slide-out drawer, both lined in black felt, your John Wayne strongbox is a secure way to organize and store a man’s valuables. If you’re a John Wayne fan, you don’t want to miss this limited-edition strongbox tribute. Intense demand is expected, so hurry. Order now!