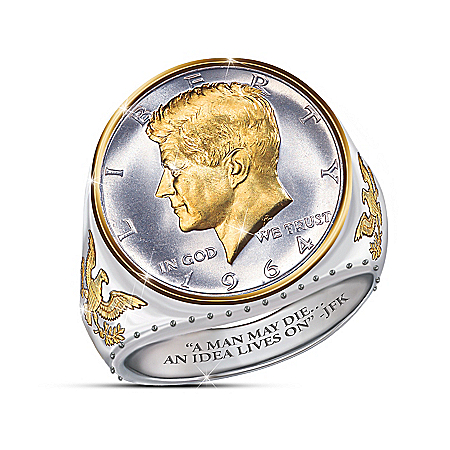 $129 The JFK 100th Anniversary Legacy Silver Coin Ring With Half Dollar Presidential Bust Design – John F. Kennedy has a historic legacy as the 35th President of the United States, precipitated by one overwhelmingly significant quote: “Ask not what your country can do for you, ask what you can do for your country.” His bold vision and historic challenge has inspired many across the nation and around the world. Now, honor his legacy and the 100th anniversary of his birth on May 29, 2017 with The JFK 100th Anniversary Legacy Silver Coin Ring, a fine jewelry exclusive from The Bradford Exchange Mint. Minted in 99.9% solid sterling silver in the coin centerpiece, this commemorative coin ring is a one-of-a-kind tribute to a beloved president.Recapturing the iconic obverse design of the 1964 JFK Silver Half Dollar – one of the most collected coins in history – this beautiful coin is offered in stunning proof quality. The centerpiece’s portrait of President Kennedy and the bezel are enhanced with 24K-gold plating. More 24K gold enriches the bas-relief eagles inspired by the Half Dollar’s reverse side. A famous JFK quote is engraved inside: “A MAN MAY DIE…AN IDEA LIVES ON.” Strong demand is anticipated for this president ring, so don’t delay. Order now!