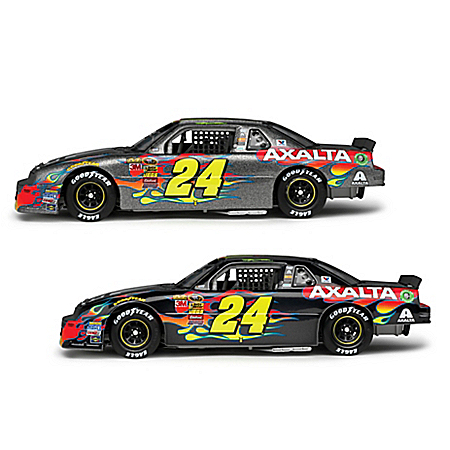 $249.96 Jeff Gordon Genuine Autographed NASCAR Diecast Car Featuring Working Steering & A High-Quality Paint Finish With Tempo-Printed Graphics – In the thrilling world of NASCAR® racing, there’s one legend whose name is synonymous with greatness: Jeff Gordon. A four-time champion, Jeff Gordon has inspired NASCAR fans from all over the world with his commitment and drive. Now, you can fuel your excitement for Jeff Gordon by scoring a diecast tribute to some of his most memorable paint schemes and passions with the Jeff Gordon Autographed Diecast Car, presented by Motorsport Editions™. Featuring your choice of 3 diecast cars, from those he raced and fantasy car tributes, these hot rides are precision-engineered in 1:24 scale. Each collectible diecast is personally hand-signed across the windshield by Jeff Gordon himself along with a numbered hologram that certifies Jeff Gordon’s genuine signature!Each of these NASCAR diecast cars boast manufacturer-specific engine detail, a body and chassis engineered in heavyweight diecast metal, accurate header contour and simulated exhaust openings. Each car shines with a high-quality official paint scheme along with tampo-printed graphics. These autographed sports memorabilia feature fully opening hoods, roof flaps and decklids that reveal even more incredibly accurate details. Due to Jeff Gordon’s retirement, there has been increased difficulty in procuring his autograph. For that reason, only a few Jeff Gordon collectible diecast cars are available for this opportunity. Quantities are strictly limited to less than 50 diecasts of each design, so if you’re a Jeff Gordon fan, you must HURRY and order now!