James Griffin U.S.M.C This Is My Rifle Rifleman’s Creed Sculpture 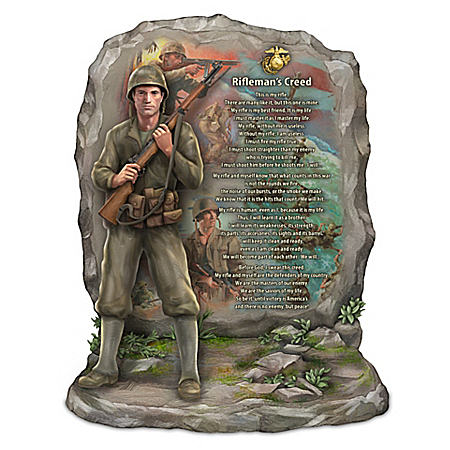 James Griffin U.S.M.C This Is My Rifle Rifleman’s Creed Sculpture

$79.98 U.S.M.C. recruits are first and foremost schooled as riflemen. They are taught that expert marksmanship is paramount and that every Marine’s rifle is a staunch defender of freedom in the pursuit of peace. For over 75 years, the Rifleman’s Creed has conveyed these critical ideals and is a doctrine that every United States Marine not only memorizes, but lives by. Now, you can honor America’s premier fighting force with the U.S.M.C. This Is My Rifle Sculpture, a limited-edition, first-ever tribute featuring the artistry of James Griffin, only from The Hamilton Collection.This officially-licensed U.S.M.C. collectible ruggedly combines two- and three-dimensional artistry and is inspired by the valiant heroes that protect America’s freedom. The sculpture depicts a valiant soldier with his trusted rifle, standing before a backdrop featuring the Rifleman’s Creed along with James Griffin’s compelling artwork of a Marines. Vividly conveying the duty, devotion and unwavering spirit of the United States Marines, this James Griffin-inspired sculpture is a wonderful way to honor the sacrifices the brave men and women of the Marines make to keep us free every single day. Strong demand is expected. Don’t delay, order now!