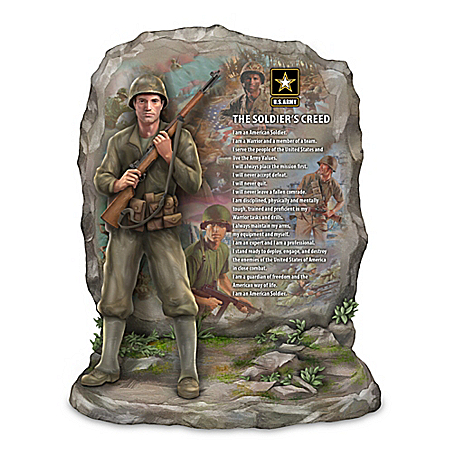 $89.98 James Griffin U.S. Army The Soldier’s Creed Hand-Painted Tribute Sculpture – The U.S. Army has distinguished itself with over 240 years of battles, war and peace-keeping missions to evolve into the world’s most elite army. And among many of its noble traditions is The Soldier’s Creed. Speaking to the Army’s mission, strength and unity, it’s the standard by which all personnel are expected to learn, recite and live by. Now, you can honor the core values expressed in this creed with the U.S. Army The Soldier’s Creed Sculpture, a first-ever limited edition exclusively from The Hamilton Collection featuring the dramatic military imagery of acclaimed artist James Griffin.Absolutely every detail of this rugged tribute is crafted and painted by hand. From the valiant soldier dressed in camouflaged fatigues holding his trusty rifle to the stone-look backdrop displaying The Soldier’s Creed and James Griffin’s vivid artistry, this hand-painted sculpture is a powerful salute to our guardians of freedom. Strong demand is expected for this remarkable tribute, which makes an impressive addition to any Army decor – so don’t wait. Order now!