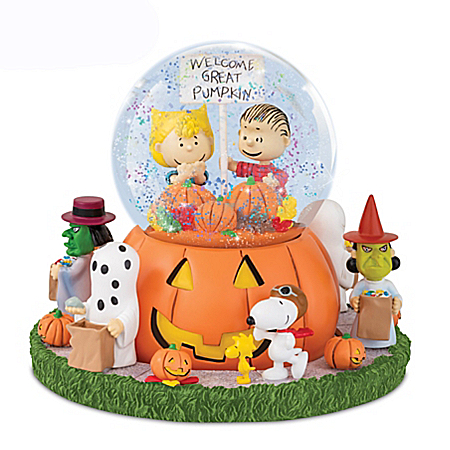 $119.99 PEANUTS It’s The Great Pumpkin Hand-Painted Halloween Musical Sculpture Featuring Your Favorite Characters That Rotate Around The Base – Welcome the Great Pumpkin into your home! Ever since its television debut in 1966, “It’s The Great Pumpkin™, Charlie Brown” has become a Halloween favorite that millions of PEANUTS® fans revisit year after year. Now, you can enjoy a new spin on the nostalgic jack-o-lantern with this It’s The Great Pumpkin Sculpture, a limited-edition PEANUTS collectible available exclusively from The Bradford Exchange. Celebrate the spookiest day of the year with a musical sculpture that plays the famous “Linus and Lucy™” theme song melody with the simple turn of a key!Individually hand-cast and hand-painted, this Great Pumpkin sculpture features the beloved PEANUTS gang dressed as trick-or-treaters. The sculptural characters include Charlie Brown dressed up in his hole-filled ghost costume holding the rock he received, Woodstock and Snoopy dressed as a Flying Ace, Lucy wearing her witch mask and Pigpen in his ghost costume. They can be viewed from every angle as they spin around on the sculpture’s rotating base. Meanwhile, Linus and Sally await the Great Pumpkin inside the glass globe, as sparkling glitter swirls around them with just a gentle shake. Strong demand is expected for this moving, musical Halloween decor and gift for Charlie Brown fans, so don’t delay! Order now!